Having spent a lot of my career to date feeling like I was shut out of many rooms, hearing that from Angharad Lee on the first day of 10 Minute Musicals felt really significant. That feeling that we are all welcome, all equal, all creative and all a part of something is what permeates the ethos and experience of this initiative.

What also struck me, halfway through the first day, was the joy of creativity. It’s so rare that we are given space to just create, with no pressure. The emphasis being on the process not the end product. Yes, we are doing a slightly, some might argue, mad thing of creating a musical, with someone we’ve never met before, in just three weeks. And yes, we’ve invited an audience to come and see that musical but none of that seems to matter as much as the creation.

Freeing ourselves from what we consider ‘our voice’ ‘our style’ and what we- or more importantly what we think others- think we do have also been massively freeing. The idea that by throwing ourselves into a new creative partnership, we open up possibilities in our own writing, our own creativity, as well as possible new partnerships for the future is exciting.

What is also obviously exciting is being thrown into a room with people who share your passion- even if they may come from totally different backgrounds. My partner Benjamin Mowbury and I certainly share passion- some might say geekiness for musicals. And it was that instantaneous shared language of what we love that has enabled us to write quickly, creatively and more importantly form a friendship as well. And in life as well as art, finding nerd friends who share your particular niche is important. And in an industry known for being brutal, findings friends at all even more so.

The creative process has been (so far as I write this as the midway point) a brilliantly rewarding one. Benji and I talked in our first conversation about the isolation of writing, and I think for both of us this has been a brilliant exercise in breaking free from that, and finding out what working in partnership can offer. It’s not to say that if we worked together longer we wouldn’t clash in our ideas, but already we’ve found an easy, collaborative way to throw our ideas at each other constructively.

In terms of writing, as a playwright first and foremost the ideas and the pressure of musical lyrics has always scared me, and a good amount of imposter syndrome at my lack of technical musical ability. But what 10 Minute Musicals has fostered is an organic way of figuring out how I as a writer and we as a pair can play to both of our strengths. And again, being able to experiment in a setting where the emphasis has been on collaboration and creativity rather than the end product has given me so much more confidence in what I can create.

The 10 Minute Musicals project is so much more than creating 5 new musicals- but how great is that, five new musicals that didn’t exist a month ago will exist in some form. In 3 different languages- English, Welsh and BSL, drawing on so many musical styles. And that’s fantastic to be able to create something new, in such a short time, with people and for some of the group, in a genre they’ve never experimented in before. But so much more that that, are the skills we develop and the partnerships formed, the network grown. We’re all guilty of staying in our own bubble. Or of feeling like we aren’t ‘enough’ to break into someone else’s bubble. But by being thrown together in a room and told- and supported- to be creative, we’ve grown our own bubble, and owned our place in the room.

And of course made something new. However slightly off-the-wall crazy it may be. Ours started with me singing to a seashell and has the phrase ‘porcelain cat’ in it…if that’s not creativity and experimentation at work what is? 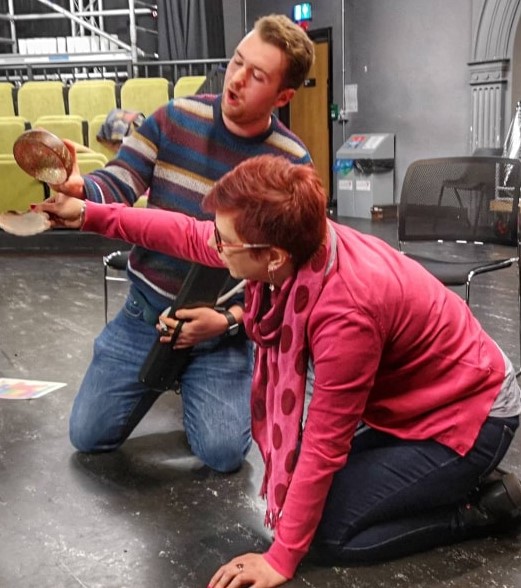